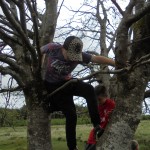 At a meeting this morning I sat next to Helen Brown from the Forestry Commission based at their Centre on Haldon Hill near Exeter. Thinking about the ‘play walks’ I offer and my previous post relating to children of the Bronze age, it was not long before I was mulling over something similar for Haldon Forest. A chance for children to think about and immerse themselves through free play and role play into the life of a Forest child (including learning important lessons for life and survival).

I regularly lead Walks in the Bellever area on Central Dartmoor which include open moorland and time in the Forest. But Haldon offers the opportunity of more of a forest focus within easy reach of schools from Exeter and much of Devon. Although I am familiar with the area, my plan is to spend time there over the next few weeks to plan routes which can include time for uninterrupted play opportunities as well as learning about the ecology and management of the forest.

Watch this space! (No cliches on this site) 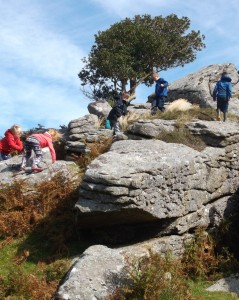 O.k. I don’t mean Egyptians, but there were people living on Dartmoor building their own monuments while the pyramids were being erected in the valley of the Nile. We are realising that these Dartmoor dwellers, emerging from the neolithic into the bronze age, were a sophisticated people with trade stretching into Europe and maybe beyond.

It is not hard to imagine similarities between us when we have photographic evidence and film of people in, to us, remote parts of the world living hunter gatherer, or pastoral lives without the benefit of the technology advances we enjoy.

But what about the children? All the evidence suggests that play was at the heart of their development, they played to learn. We see it not just in humans but in all the higher order mammals. How did those children learn to to become hunters or farmers or light fires or build a waterproof shelter? How did they learn what they were capable of physically, to run, to jump, to throw?

If you want a glimpse into the lives of those children give your children the opportunity for extended play in wild areas, see how they test themselves, support each other, explore, invent games, develop skills.