Looking forward to running my ‘Playground Maths’ course at Sticklepath Primary School,  Barnstaple on Wednesday – my thanks to Sam Warner (co-head) and Matt Pennington for facilitating this.

On Thursday my freelance work takes me to Pixies Holt for a bit of caving – assisting not leading!

Friday it is the Y6 from Berry Pomeroy Primary School for a 4 hour+ ‘Adventure Walk’ in the Haytor area. Not only will we be learning about the wildlife and history but also playing on the rocks and in a stream. They are bringing swimming things so they can get as wet as they like!

I really enjoyed working with the group who came to Cornwood after school yesterday  for my ‘Playground Maths’ course and the feedback was very encouraging. Many thanks to Simon Hall (Executive Head and his staff for use of their facilities and equipment) Here are just a few quotes from the feedback forms.

‘All were activities that are easily managed, resourced and replicated’ Neal from Manor Primary, Ivybridge

‘Really useful session – lots of ideas to take back to staff’ Sarah from St Pauls, Plymouth

The weather was perfect yesterday for a walk (run and play) from Belstone, up to Belstone Tors and back along the Taw Valley. This International group were great fun to be with and included children and young people from Lithuania, Spain, Italy and Okehampton along with accompanying staff. The feedback was great and the children’s command of English impressive!

I am looking forward to running my ‘Playground Maths’ course at Cornwood Primary School on Thursday 28th March 2019. It’s a twilight course costing only £20 pp. Further details can be had by emailing outsideandbeyond1@gmail.com. (Closing date Thursday 21st March) Please state if you came across this via this website.

This poem was created by ‘Playground Literacy’ workshop members at the SOLID conference at Buckfast Abbey. It emerged from a group exercise using prepositions – apologies that I am unable to name-check the authors.

Under the Ancient Abbey

Under the ancient abbey lies an unopened tomb of a lost queen.

Through time she had travelled, through stars and galaxies.

Towards the moon she flew, her skin sparkled and her dark locks flowed like a comet.

Until her invisible earthly bonds drew her back to the ancient abbey.

Inside the abbey that she has guarded since her untimely death.

Over her tomb you should never tread, if you do you’ll end up dead!

The name might not survive for long but the conference at Buckfast on Friday was thoroughly enjoyable. It was a great chance to meet teachers interested in developing outdoor learning in their schools.

As there was a literacy theme I ran a ‘Playground Literacy’ workshop which, starting from children’s motivation to play gave different ideas to play with words and sentences. These were often nonsense (which children love) or almost poetic! (there is a fine line.)

The highlight was the session on ‘The Lost Words’ when the artist talked to us and we worked in groups as she created beautiful pictures in front of us.

Already looking forward to next year.

Courtesy of the South West Coast Path Association I am able to offer an extra session to the ‘Explorer Group’ (just eight children with their ‘Learning Mentor’) from Victoria Road Primary School. Last term the school funded four sessions for this carefully selected group to enjoy and learn from ‘Adventure Walks’ on Dartmoor. Our March day will be along the Coast path near Plymouth and I know that they are looking forward to it and I am looking forward to meeting up with them again.

I thoroughly enjoyed the Annual (National) Learning Outside the Classroom conference at the Black Country Living Museum (Dudley).https://www.bclm.co.uk 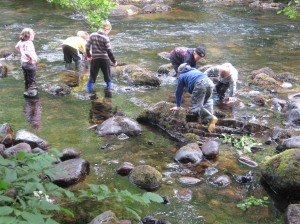 The early feedback from my ‘Inspiring Play in Wild Areas’ workshop has been very positive. I would love to have had time for more discussion questions etc. but time was restricted. If anyone is interested in the fuller version (c 90 mins) then please get in touch. Here is a pdf version of the power point from my presentation. Inspiring play in wild areas summary

Also attended a couple of really useful workshops. The first on the risk/benefit approach to risk management which chimed well with my own approach. The second a very  enjoyable, session on ‘Music in the Outdoors’

A very well organised conference with a wide variety of keynote speakers.

I have thoroughly enjoyed a series of 5 walks for groups of year 7 children from Bideford College. They were staying at the Dartmoor Training Centre. On most of the days the weather has been ideal for walking and the dry summer has meant that under foot it has been a little easier than last year. The students have been really responsive and ready to learn about Dartmoor, its wildlife and history whilst testing themselves over  a much longer distance than they are used to (including a Tyrolean river crossing!) The staff have also been very supportive and given positive feedback. I am now looking forward to a similar experience over the next few weeks with year 7 students from Launceston.

I’m delighted to be providing this workshop for the Annual Conference of the Council for learning Outside the Classroom. The conference will take place at the Black Country Living Museum, Dudley, on Thursday November 22nd 2018.